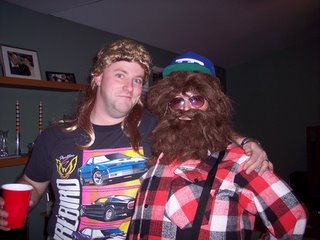 That's me on the right if you didn't already guess. I'm a lumberjack :)

I don't wanna sound queer or nothin, but Paul's costume was kick ass. :)
Written by Jack at 7:30 AM No comments:

What's is going on with me today? I went to my first meeting this morning at 8am. Forty five minutes later, I'm pulling out of the parking lot and on my way to my next meeting across town. So I'm driving...and driving....and driving...then all of a sudden, I look around and I'm just around the corner from one of my jobsites. OOOps - I'm supposed to be at my gc's job office not the site. So I head in a different direction, expecting to hit the highway and head north towards the job office. Which way to I go when I hit the highway? South. South for about a half a mile before I realized I was going the wrong way. I finally turn around and get myself on the right path and I did make it to the meeting but geez....I almost got totally lost in a city I've known for almost my entire life. I label me a moron today.
Written by Jack at 1:23 PM No comments:

I forgot Halloween was on Monday. I was really hoping that this coming weekend would be trick or treat time because Paul and I would be gone....but no.

Halloween is my favorite holiday ever and it totally bums me out that the kids in my 'hood are more into getting candy than showing off the costumes. When I was younger, you weren't even allowed to go out on halloween if you weren't dressed up. My dad would make sure we were all set before we left and then bundle up for the walk around the neighborhood. My mom would even dress up for the kids who came to the door. If you put on a half-ass costume, you were SO uncool when I was a kid.

In my 'hood last year, I went through five bags of candy in 20 minutes - handing a piece out to every kid that said "trick or treat". Most of the time I didn't want to give it away because the kids had on a sweatshirt, jeans, and maybe a mask as a costume. I was so disappointed. Then the parents would follow their kids in their mini vans as the kids trick or treated. Yea. I have never seen a traffic jam in a neighborhood til Halloween night in my 'hood. It sucks. Most of the kids don't even care about the whole 'spirit of halloween' too. Some of them don't even say trick or treat, they're like "can I have candy please?" I feel like looking those kids right in the eyes and saying "go home and get a costume on, act like you like halloween, say the right words, and then I'll give you some candy." Buuuuuttttttt, then I feel bad cause what if they can't afford a costume? What if they're out getting candy because all they want is a little chocolate joy in their little lives? What if all they want for Christmas is a little candy on Halloween? See, now I feel bad. great.

Maybe I'll dress up this year. I have a skeleton costume I'm not using. Maybe it'll be cool. Maybe I could get all the neighbors to dress up on Halloween too. hmm.....ideas, ideas, ideas.
Written by Jack at 7:32 AM No comments:

Hey buddy. I will leave this place if you keep trying to tear me down. I aint backing down. Go ahead, challenge me. I'll give you a good fight. I may be young but I aint givin up. I don't have a big house, a couple of old cars, and a couple of very expensive toys to support. I can go anywhere, do anything. Gimme somethin old man - start it up cause I'm not swallowing your shit anymore.

i need some slipknot.
Written by Jack at 9:12 AM No comments:

i love internet radio. it's so great. i can listen to everything and anything i want, whenever i feel like it. right now, i'm swingin and shakin my head from side to side - rockin out to some Van Halen "Aint talkin bout love". wait...wait...wait....YEA Diana Ross "Upside Down". Ahhhhh! Do the snake! snap! do the snake! snap! i love it. if there was a camera in here and security guards monitoring my every move, I'd be so embarassed. hold on...holy shnikes! this is an 80s channel but the DJs are German. But the songs are in english...how does that make sense?

oh i meant to write about this yesterday but i forgot : everyone knows the Die Hard movies right? Well, i was reading some random facts last night and one of them said that when the whole Die Hard storyline became an international hit, it was played all over Europe even in Germany. However when Germany viewed the movie, they changed the evil Germans to evil people from an unknown country in Europe. Weird huh? i thought it was weird. people probably do it all the time but i thought it was weird.


PS-i've had internet radio for the last year or so, i don't know why i'm so excited about it now. i gotta stop drinking so much coffee in the morning.
Written by Jack at 7:19 AM No comments:

Oh i have such a good costume for Halloween. It's gonna be awesome.
Written by Jack at 7:19 AM No comments:

May you have a long and prosperous marriage!
Written by Jack at 1:47 PM No comments:

Boneyard Show on the History channel.
Awesome.
The grappler, the gynormus shear, the magnet, and the guillotine machines.
They destroyed navy ships, retired aircrafts, and other military arsenal.
They recycled the steel from the twin towers and formed it into the nose of the USS New York.
It was cool.
It was wicked cool.
Written by Jack at 7:40 AM No comments:

Just put Brian's blog link up. Back story: He and I are the only young cousins who actually sit down and have real conversations about stuff at the family Christmas parties. Earlier this year, he decided to move to Japan and teach and he's been writing the family about his travels ever since. He's part of my Irish Catholic side so one can imagine how many emails he's got to send out every time he writes. Anyway so he's started a blog in lieu of the many emails. If you're interested - click the link.


In other news, my cousin had her baby! Yey! A wee little girl they named Olivia I think. YEY!

side note: I loved that name. It coulda been so 50s glam man - Olivia Walters - oh well. I'm happy for her anyway. that little girl is gonna be so cute and sweet!
Written by Jack at 7:28 AM No comments: 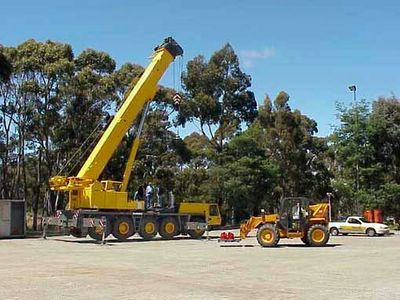 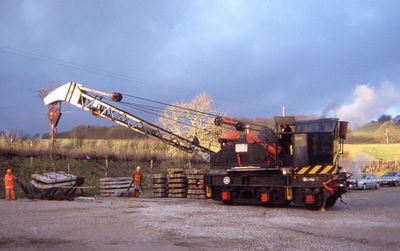 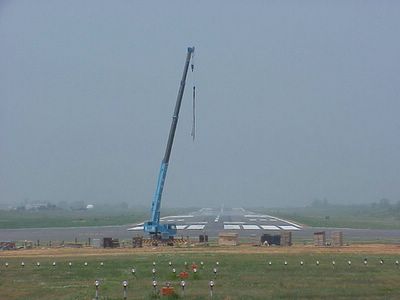 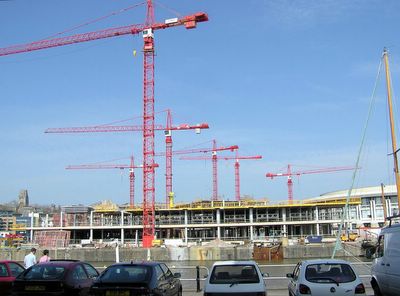 it's october already. i can't believe it.

I really need to take a day off. I should take today but I'm already here and there's no sense in leaving now - not after my dad's already noticed I'm in my office.

I'm reeeaaalllly tired from this weekend. I think I ate something terribly wrong on Friday because I had some awful heartburn, digestion problems, and overall nausea. I tried to take it easy on the trails but I wasn't doing very well in the first place so I was just frustrating myself and making it more difficult to concentrate on riding and on keeping my illness on hold. It was terrible.

I seriously made an effort not to make a big fuss about how I felt about my riding this weekend because I didn't want to bum anyone out but a little bit slipped out. I couldn't help it. I was so frustrated that I was actually angry with myself. So angry that I wouldn't doubt that it was a major contributor to my feeling sick. I just wasn't making the turns at the right time, I dropped my bike three or four times (three or four more than usual), twice I couldn't get up a hill without my brother's help, my bike stalled six times, I had to walk my bike a one point, and I just couldn't seem to do anything right. That wasn't me, I don't normally do any of that. ......... grrrrrrrrrr.